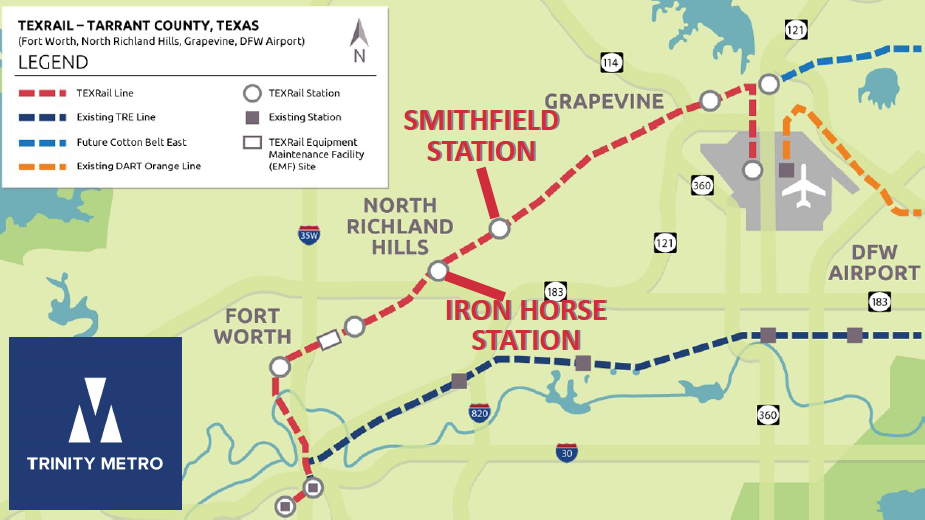 The TEXRail project is moving full steam ahead! The new commuter rail line will extend from downtown Fort Worth, northeast through North Richland Hills to downtown Grapevine, and then into DFW International Airport’s Terminal B. Two of the eight stations are located in North Richland Hills city limits. The Iron Horse Station is just north of Loop 820, west of Rufe Snow with 376 parking spaces. The Smithfield Station is located northeast of the Davis & Mid Cities intersection, with 559 spaces, the largest of the eight stations.

Unlike the heavy rail cars used on the nearby Trinity Railway Express (TRE), TEXRail uses Diesel Multiple Unit (DMU) self-propelled passenger rail cars, which create 72% less pollution and 75% less noise. These more environmentally friendly cars are also used on the Denton County Transportation Agency’s A Train. In addition, the railroad bed was reconstructed with new concrete rail ties installed to further reduce the sound and vibration coming from the track itself.

The TEXRail line is expected to begin transporting passengers in late 2018 and is projected to carry about 8,000 daily passengers by the end of its first year with ridership increasing to 14,000 by 2035. When completed, the TEX Rail line will provide residents and visitors to Tarrant County with an additional convenient and reliable transportation option for travel around the DFW area. Departing every 30 minutes during the morning and afternoon commute, these state-of-the-art rail cars will allow riders to make more of their time in transit with Wi-Fi, work tables, USB ports and bike racks.